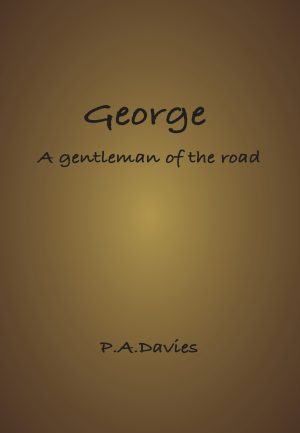 Gongle Shanks sent me a message that read something like, “P.A. Davies is a great guy! Do a little post about him.” I thought, “I guess I’ll pencil it in!” It’s not often I say anything nice about that ridiculous imp, but he was right. (Don’t tell him I said that! It will go straight to his bulbous head!)

So, I set out to acquire a copy of George: A Gentleman of the road without doing any research first. Typically, I like to know what I’m getting into but when orders are given, one must jump. After some grumbling and a bit of whining, I put aside my baking and gardening to read.

George: A Gentleman of the Road is amazing!

Everyone should read about George. His life has been one that few people have the blessing to experience. He’s had his highs and his lows, but he also had love few find. George is truly an inspiring person!

It is said that you should never judge a book by its cover, yet the moment I laid eyes on George, that’s exactly what I did!

And as I watched the aged member of Manchester’s homeless fraternity, walking slowly along the street, hoping to collect enough spare change in his dirty and tattered polystyrene cup to fund his next meal, I couldn’t help but think to myself … How do I possibly avoid giving this scruffy looking man any of my hard earned cash?

But in an unexpected turn of events and a surreal series of meetings, the man I had quickly pre-judged, revealed his extraordinary life.

This is George’s story!

Little did I realize, this was not a work of fiction, but based on a homeless man of Manchester! What a privilege it must have been to hear this man’s life story. Good thing the witty tramp was able to see through the facade! Otherwise, P.A. Davies would not have written such a brilliant story and the world would never know George.

P.A. Davies has written four other books, all with very different characters and plot lines. I’m sure they are written as fantastically as George, I will be acquiring them for my collection through MineEye.

Please take a moment to enter the contest to win A P.A. Davies E-Book box or a $20 Amazon voucher!